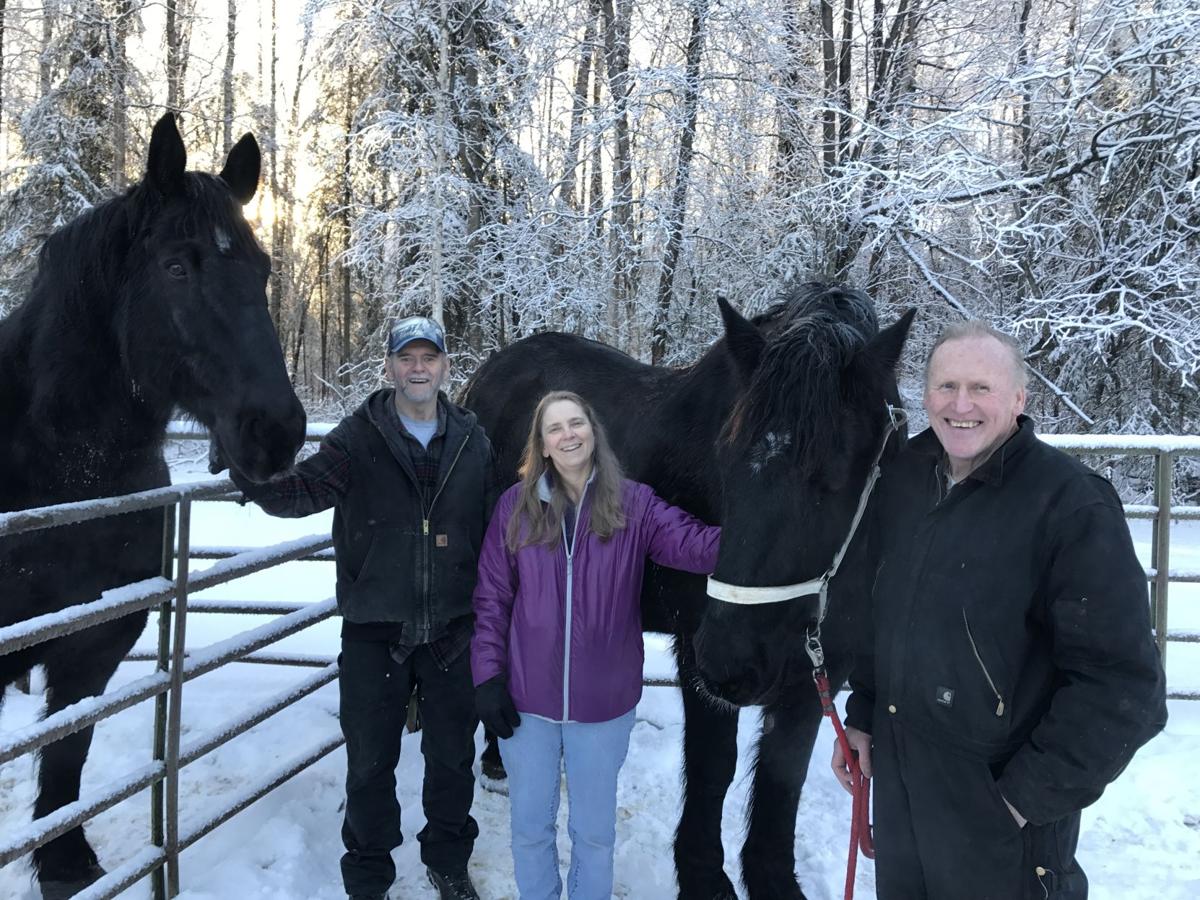 It isn’t that mushy type of love that characterizes mid-February, but it is love. It wasn’t celebrated with chocolate and flowers.

It was expressed through the breaking open of hay bales, distribution of grain and the mucking of equine poop.

It is the kind of love that did the never-ending chores that accompany the keeping of horses, yet it asked for nothing in return.

“I would definitely say what my neighbors did for me was love,” Jon Nauman, owner of the carriage company said.

In April 2014, Nauman was severely injured in a freak accident while training his team of Percheron draft horses and spent the next couple months in the hospital.

“To this day, I still don’t know exactly what happened,” Nauman said. “I wish Jack and Dan could tell me.”

Dan and Jack are two of the seven horses that reside at Carriage Wheel Ranch, which is home to “Alaska’s Gentle Giants,” as Nauman calls them.

Dan and Jack were the two hitched to wagon on that fateful April day when for the first time in 40 years of driving horses, something went horribly wrong for Nauman.

He and the horses were alone on the rural road. He was training in preparation for the annual Kid’s Day in downtown Anchorage at which his teams are a featured treat for the city’s kids wanting to take a horse-drawn ride.

“We were heading back home and something spooked both of them,” Nauman said. “I thought maybe a bear, but there were no reports of any bears that day.”

Nonetheless, before he knew it, he had lost the reigns by which he controls the horse’s movement. He was off the buckboard and on the pavement. Dan and his 2,000 pounds was stepping on Nauman. Jack had fallen in the riggings. The team was on Chugiak’s rural Aurora Borealis road headed toward Helluva Street where they would have turned right to head for another right on Blair to head home. But instead, Dan was super spooked and started running. In the process, Jack was being drug.

The two horses ended up at their veterinarian’s office on the S. Birchwood Loop.

Jack had cuts all over his front knees and down his belly from being drug across the pavement.

But Nauman didn’t know that at the time. He wouldn’t for weeks until his own condition was stable enough for doctors to talk to him about what happened to his horses.

Nauman sustained 10 broken ribs, a broken sternum and other injuries. He required a lot of blood – 700 milliliters, he said.

“I didn’t know what was going on there for about two weeks,” he said.

The thought of who would feed the horses hadn’t come to him yet.

But it had to Tom Knott and Angela Vassar – neighbors in the tight knit community tucked between the ridges of the S. Birchwood Loop and the Peters Creek.

Vassar took the morning feeding and Knott the evening.

“I love that man,” Knott said. “There just was no question that I was going to do anything possible to help him.”

Vassar echoed the same sentiment. Each of her four children have worked at Nauman’s farm – her youngest Rachael, age 15, still working there currently helping with feeding and stall mucking.

“My whole family just loves him to death,” Vassar said. “He is such an inspiration with everything he does.”

Nauman actually is a bit of an icon in the Chugiak-Eagle River area – and even beyond in to Anchorage. Those elegant horse-drawn carriages pulled by well-groomed and very tall black horses on weekends in Anchorage are owned by Nauman. Many a marriage proposal or birthday celebration has occurred in his carriages. He takes the “Gentle Giants” to numerous local events including Eagle River’s Bear Paw Festival and Merry Merchant Munch. Many kids groups – including those for children with disabilities – take field trips to the Carriage Wheel Ranch – where Nauman not only provides an old-fashioned hayride in the countryside, but also a traditional campfire upon the ride’s return to the farm.

His seven-week stay in the hospital was routinely mentioned on social media and his daughter set up a Caring Tree online newsletter to keep community members updated. And the local chamber of commerce staff at the time kept track of Nauman’s progress letting others in the business community know how he was doing.

Through the summer of 2014, Nauman’s neighbors and the drivers of his teams of horses kept the farm and its appearance commitments on track.

It was tough, he said, to watch all the activity and not participate.

But he also knew the farm – and his beloved horses – was in excellent hands.

“Without all of these people, I have no idea what I would have done,” Nauman said. “If these folks had not stepped up, my horses most likely wouldn’t be here anymore.”

By fall of 2014 he was able to slowly return to some of his duties.

He couldn’t jump up on the buckboard from the side anymore. His first ride with the reigns in his hand happened on his large 30-passenger wagon on which he could climb up the back of the wagon.

“I kinda cheated getting back on there,” he said with a smile.

Four years later, Nauman said he feels blessed to still be doing what he loves at age 78.

He can’t lift the rigging his horses wear while being driven directly from the ground. He has to put the rigging on a stand, wait a bit and then lift it the rest of the way over the horse.

But that doesn’t bother him.

He didn’t die on a day that he well could have.

“A day doesn’t go by that I don’t think about what happened and wonder,” he said. “In the 20 years I have been driving in downtown Anchorage, I have been side-swiped by vehicles and had all kinds of things either thrown at the horses and nothing has ever happened like what happened that day when we were all by ourselves on Aurora Borealis.”

On Tuesday when Knott and Vassar visited Carriage Wheel Ranch for some photos with Nauman, the trio recalled the nearly two months Nauman was in the hospital.

“The whole neighborhood was terribly concerned for him,” Vassar said. “We are all just so thankful that he is doing as well as he is.”

As Dan and Jack nuzzled the trio of humans hanging out with them in the paddock, Nauman joked with his equine companions that they better not step on him again.

He doesn’t blame the horses for the accident. He knows Dan didn’t mean to hurt him.

Of the two horses, Dan is the more extroverted.

Dan was rubbing his face against Knott and occasionally nipping at his hat.

Jack – certainly a bit more shy than Dan – had his ears pointed back and was closing his eyes.

The two horses are brothers that Nauman purchased from Dawson Creek, British Columbia about ten years ago.

They are massive animals. Their height – measured on horses at the withers where the neck and body join – is more than 18 hands. Each “hand” as is the equine standard of measurement is four inches. Standing next to them, it is easy to imagine the force that is their powerful muscles in action running at a full gallop in a fight or flight scenario.

But Nauman is correct: they are downright gentle.

As they took carrots from human hands, their noses nibbled but their teeth did not bite.

Nauman again thanked his neighbors, giving them the credit for keeping his farm in operation.

“I got to take a long vacation,” he said.“While you all did the work.”

The trio shared a laugh and Knott and Vassar humbly reminded Nauman that he probably wasn’t on vacation.

But the two would do it all again without question, they said.

“This is what neighbors are for,” Vassar said. “That is the Alaskan spirit. We just take care of each other.”