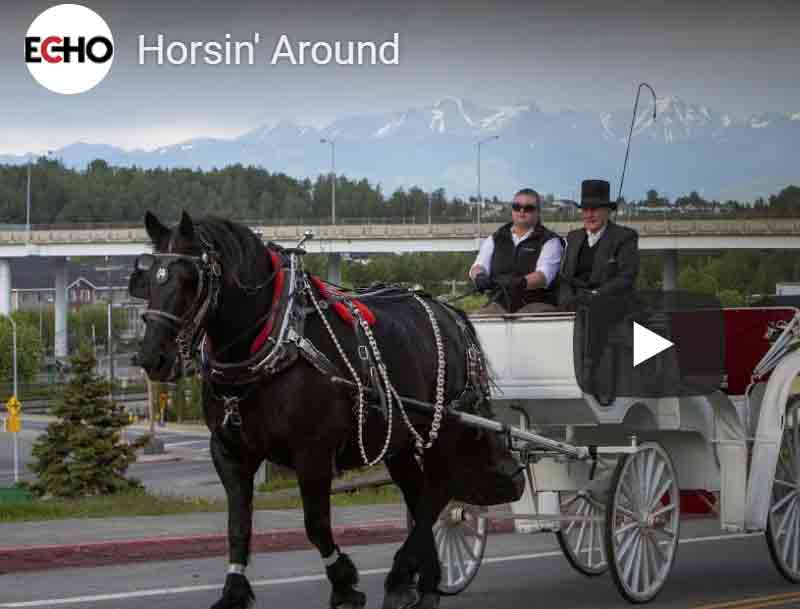 The work is hard, the hours long, but the rewards make it all worthwhile.

Interview in ECHO Magazine
July 1, 2019 by Daniel Shepard in Day in the Life

Jon Nauman, owner of the Horse-Drawn Carriage Company and the Carriage Wheel Ranch made that abundantly clear as he visited with me at his ranch in Chugiak.

“I love giving people an experience they will never forget. I love doing weddings and surprise parties and that sort of thing, giving them a taste of yesteryear. I guess that’s the reason I do it. I certainly don’t make any money at it, never have.” With a bit of laughter, he adds, “I often tell people, you don’t have to be crazy to do what I do, but it does help.”

Jon will turn 80 on July 4th of this year, but he doesn’t seem to notice. It’s impressive to watch him interact with his horses. To Jon, “A horse is not a horse unless it weighs a ton, eats 50 pounds of hay a day, eats 10 pounds of grain a day and washes it all down with 30 gallons of water a day.” These are Draft Horses.

For almost 40 years Jon and his team of about 12 part-time drivers, four ranch hands and six Draft Horses have made it possible to offer year-round carriage rides, hay rides in fall, and sleigh rides in winter. Every year you will see them at the Bear Paw Festival and Merry Merchant Munch in Eagle River and the Saturday Market and Fur Rondy Festival in Anchorage. And, of course, he has attended more weddings, engagements, birthdays and special events than he can count. Plus, all summer he gives carriage rides in downtown Anchorage.

How it all started

Jon grew up on a small farm in Canton, OH. The farm had a few cows and farm animals and one empty stall that would work well for a horse.

Jon recollects, “It all goes back to when I was in Jr. High, I guess. Gabby Hayes had a western TV show and was always on when I got home from school. He was having a contest to win a horse. I think we had to submit names for the horse or pony. I had that stall all fixed up, ready to win that horse.  I was sure I was going to win but didn’t of course.”

Jon was disappointed when he didn’t win but was still able to acquire a horse. It just happened that a neighbor was giving away a horse at the time, and Jon was the lucky one to fill that empty stall.

With the newly acquired horse, his Dad bought a used buggy, and the two of them fixed it up. Jon laughed, remembering, “It was evident that Dad and I didn’t know anything about harnessing a horse, but that’s when it all started.”

While in high school, not only did Jon continue to develop his fondness for horses, he found a new passion as well – a desire to fly airplanes. With the family farm located near a sod airstrip, it was easy for him to ride his bike there for lessons. About this time, he got his first job as a Telegraph Boy for Western Union, “I got paid $1.01 per hour. The one cent was for wear-and-tear on my bicycle.”

His Dad felt that since he had a job, he should pay room and board at the farm. Jon recalls how he rode his bike five miles to school, and then after school, he rode his bike into town to work at the Western Union office where his Dad would pick him up at midnight when his shift was over. Unknown to Jon, the family saved his rent money so he could later finish paying off his flying lessons.

When he did his first solo flight, he flew over the family farm, which got Jon in a bit of trouble with his fearful Mother. She scolded him, saying, “Jon, you were too slow! I could see you sitting in that airplane!”

With a matter of fact tone, Jon shares, “I got my pilots license before I got my driver’s license.”

Then it was off to college; he attended Manchester University near Fort Wayne, Indiana. He obtained degrees in secondary education and biology. Not really wanting to teach, Jon said he got the degrees more for an “Insurance Policy.” His time at Manchester did pay off though. He landed a job with the United States Geological Survey (USGS) and met his future wife, Myra.

With his new job and new wife, he was transferred to Alaska in 1970 doing baseline studies for the Trans Alaskan Pipeline and continued with the USGS until his retirement at age 55.

He thought he would be in Alaska for two years, but 49 years later, he’s still here.

“I’ve been horsin’ around with horses for almost 40 years. I started the business with the idea to have something to do when I retired, something to keep me active and in shape,” said Jon. Then adding with a laugh, “It’s almost killed me two or three times.”

He continues, “I don’t really care about that, I really like giving people an   experience of yesteryear, that’s why I do it.”

Jon remembers when downtown Anchorage changed the street lamps to a new design, “I started doing business downtown in ’83. At that time, they just put those ornate street lights along the avenues, I guess it looked horsey to me. That’s when we started giving rides down there.”

Also, during this time, Jon and Myra managed a church camp in Chugiak. Jon followed-up by saying, “Myra and I got the opportunity to be managers at the camp. For publicity for the camp, and for my daughters, I got the first horse, a draft horse. I didn’t know a whole lot about any other kind of horses at that point. Then I answered an ad about a team.” He shakes his head as if to say, “What was I thinking.” Then added, “It just got outta hand after that!”

Jon and Myra lived at the camp with their daughters for 18 years before moving to the current location in Chugiak, a beautiful setting adjacent to Peters Creek. Myra was also familiar with horses as she grew up with them on her parent’s family farm and was very supportive in building the Horse-Drawn Carriage Company.

In 2011, Jon and Myra visited Hawaii to celebrate their 50th wedding anniversary. While they were there, and at the urging of Myra and his daughters, he participated in the Lavaman Triathlon. Jon, an avid swimmer and long-distance runner, finished in first place in his age group.

Myra was diagnosed with cancer shortly after returning home from Hawaii and passed away a year later. Jon and Myra were married 51 years and worked together to build the business to what it is today.

Being in shape pays off

Over the years, Jon said he learned a lot of lessons about driving horse teams. Sometimes the hard way.

“I teach beginning driving classes. One, to find drivers and two, I don’t want people to learn the hard way, like I did. I have the scars to prove it.”

To Jon, safety is paramount, “You can’t teach people how to read a horse in a day. I still can’t read a horse after 50 years. Every horse is different, and every driver is different. That’s a hard thing to get across and what we do is pretty intensive.” To emphasize the point, Jon finished his thought by saying, “It’s hard work. You don’t do this because it’s easy, you do it because you love horses and want to make people happy and do it safe.”

Over the years Jon said he has had minor incidents while driving his teams. But nothing like what happened in April 2015, shortly after returning from Hawaii. While training a new team of horses near his Chugiak home, Jon had a near fatal accident. Jon has no memory of the incident, but he almost died due to extensive internal bleeding, a punctured lung, shattered shoulder, and broken ribs. A passerby found him lying in the street and called for medics. Jon did his best to explain, saying, “Putting together what I think happened now, something must have scared the horses. I had a run-a-away and I got thrown off the wagon. The best I can figure out is either the wagon ran over my chest, or one of the horses stepped on my chest.” The horses were found with the wagon on North Birchwood Loop about a quarter mile away. It appeared one of the horses had fallen into the ditch which stopped the team.

Jon had several surgeries to repair all the damage, 72 screws and several titanium plates put into his chest to hold everything together. With a bit of a proud chuckle, he says, “I have more titanium in my chest than Superman!” Jon was hospitalized for seven weeks and had 14 months of physical therapy to recover. Jon’s doctors credit his physical fitness in saving his life. Jon summed it all up by saying, “I had just gotten back from Hawaii and the Lavaman competition and was in the best shape I could have ever been in.”

Even now he’s still not sure what happened, “I think about two things every day. My wife and what happened on that day.”

Even with a near death experience with the horses, he has no plans of slowing down. He continues to get up every morning at 4:00 AM to feed the horses, then off to the Chugiak High School pool to swim until 7:00 AM. Next, it’s time to start running his errands; getting groceries, and doing household chores. Along with returning phone calls, Jon said, “I spend a lot of time keeping my books up. I spend at least a couple of hours a day reviewing spreadsheets comparing this year to last year, how much money do I have in the bank for paying my bills.”

Jon gets his hay once a week in Palmer. When on that run, “I take a load of ‘reconditioned hay,’ not manure, ‘reconditioned hay,’ to Mark Rempel’s organic farm. I have a dump trailer, and once a week I take a load to Mark, he composts it and spreads it on his fields.” He then picks up six 700-pound bales of hay which have to be unloaded into the barn upon his return. Then it’s time to start getting the teams ready, loaded into the trailer, and off to work giving carriage rides.

When asked if he would do this all over again if he had a choice, Jon replied, “Yea, I think so. I’ve always been sort of a loner, … I like doing things by myself. I also like to say, ‘Yep, I can do it.’ My Mother always used to say, ‘Adversity builds character,’ and part of my character is horsing around!”

Daniel Shepard is a freelance photojournalist and regular contributor for the ECHO News. He lives and owns a photography business in Eagle River. Reach Dan at: dan@dan-shepardphotography.com